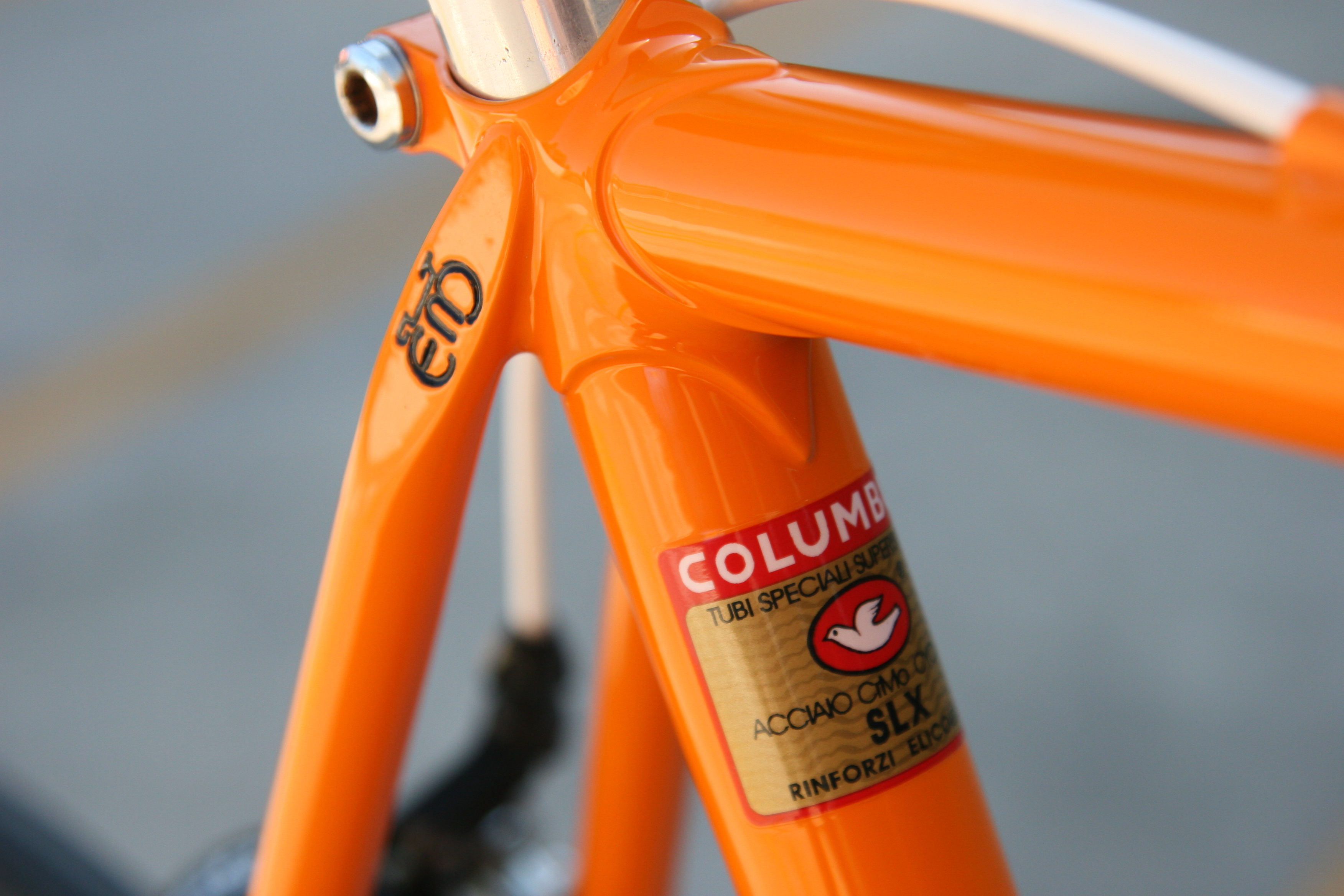 It’s a fact of life that some plans don’t come together.

When a plan turns to shit and the money is gone, your Mum will give you a hug, tells you it was a good idea, shame it didn’t work out blah blah. And then, in the kindest way, she will remind you to not throw away more good money on it.

That’s why I didn’t tell my Mum about this bike. She would never have encouraged me to see this one through.

In October of 2017, I started talking to a potential customer in Perth. Tim had seen this Bianchi I had done, and wanted something special for himself. I don’t think I actually talked him into a Merckx, but I had a couple on the boil and the AX Titanium I was working on seemed to fit his dreams nicely. We talked many times to discuss the details.

Alas, that bike wasn’t to be, thanks to #crackgate, so I started looking for a frame again. After a while, I found a perfect pedigree 86/87 Corsa Extra in the UK. Sizing was AOK, a pro-built 57cm with number hanger, in Columbus SLX and likely to have the normal Merckx road race geometry of the time. I spent up on it; $800 to land it here. It was a good ‘un, though – worth the extra cash to become Tim’s ‘forever bike’.

The serial dates it as an ’86. The paint job is much later, though. It’s been repainted at the factory in the 90s. The number hanger is the early kind, so it’s a pro frame, and yet the hanger was kept in the repaint. Hmmm, very interesting.

The serial number ‘4000’ I think is important – maybe it’s the start of a new design. The ‘Y’ is something different too – normally you’d find an ‘X’ for Corsa Extra, but this isn’t always the case. I have no idea what the Y signifies.

I think this frame was a custom-made, maybe for a pro or maybe for a cashed-up clubbie. I reckon it raced for a few years, then went back to the factory for a repaint, to be kept as a memento.

When it arrived here, it was obvious it needed another repaint, and Tim spent a week or so deciding what colour he wanted it to be. In the end, I think most Merckx pasionistas have to own a Molteni, and Tim decided he wanted one for his first bike. A good choice it was too; with a black gruppo, it’d be a real head-turner, and as a Corsa Extra in SLX, it’d ride beautifully.

I started gathering bits I’d need while Tim got to work on the components. He sourced a 105 11 speed groupset, a pantographed stem and some wheels. The frame arrived, and I was waved in by the painter. It was a plan coming together.

It was during the sandblasting of the frame where it all came undone. Another “Sorry, Steve.” phonecall. The seat stays had terminal rust – both sides. Salted UK roads were to blame, this frame is D-E-A-D and I was now 2-nil down on this project. D’oh!

This frame was now off the table as well, and I was out of good options after two consecutive fails. I paid Tim back for all his bits in a box in my workshop, and went off to regroup.

Tim made a good call to source a complete bike from a mega-Merckx collector in France, and I hung up the rusty no-good frame in the shed.

A couple of months later, I’m now $900 in the hole on this bike, because I’ve taken it to a chromeplater to have it dechromed, and have the the red oxide coating removed. Bit of irony there, the thing was very heavily coated. Harrumph!

Even though Mum’s voice in my head was warning me off, I was still thinking of repairing this frame, because it was just too good to throw in the bin. Do you know this inner voice? The one that shouts at you that YOU WILL NEVER GET YOUR MONEY BACK, WHAT ARE YOU DOING?

So I took the frame to Rob @ Tempest Bicycles in Cessnock for a look. Rob’s a successful frame builder with very little spare time to do repairs, but he shares my passion for bringing the good ones back from the dead.

This one, as it turns out, was a good one, and it was never really a question for Rob about reviving this dead frame.

Rob ordered a pair of new SLX seatstays from the Columbus importer, and set about removing the old ones. “Mr Hart, what a mess!” as they say. He took lots of photos of a very rusty (and dangerous!) pair of seatstays – you can see his posts on Instagram @tempestbicycles.

Of course, the relatively simple job of replacing the stays was complicated by some unmoveable top eyes. Determined to keep the Merckx pantographs, Rob removed the eyes from the top lug, and machined up a pair of inserts to connect the new stays to the refurbished eyes. After brazing together, they were reattached to the frame top and bottom. A few hours of filing and sanding, and we’re back to new. Rob also cold-set the original dropouts to 130mm, because there was a modern wheelset and gruppo waiting for it.

Brake bridge back in – top of the line Silva ‘Mod. Dep’ version.

Top eyes brazed back into place after the work to connect them to the new stays.

Eight months has now passed since we started, and the rollercoaster has finally stopped. The repaired frame is back in my hands and ready to ride again. A quick build on the frame to make sure everything is OK on a 25km shakedown ride. Green lights everywhere, what a relief!

The frame went off to be painted by Peter at Star Enamellers, with new Cyclomondo decals.

A month later, and I think you’ll agree that it looks amazing. The 105 groupset in black looks amazing and works brilliantly, and the Fulcrum wheels are as good as gold. The black suede Turbo saddle may not ever be used in anger, but it looks retro-cool on the finished bike.

As always, I’ve added some small ‘signature’ details, like painted seatpost flutes, and the matching orange bottle cages. Some cable liner under the BB to stop cable-rub on the paint. Stuff like that 🙂

This bike is thirty-two years old…can you tell?

I sent Tim a couple of pictures of the bike this morning. He’s now riding one of Marcel Gono’s ‘98 Team Gan bikes, happily carving up the Perth triathlon scene on a twenty year old steel Merckx. It’s too late for Tim to own this bike, but it’s not too late for him to share the outcome of our vision.

When I told him that the finished bike was redemption for what went into the restoration, his reply was that it was a great name for a bike.

So there you have it : www.millfieldvelo.com.au/showroom/Redemption

Update December 2018 – this bike is now sold, and enjoys living indoors when not being ridden in Adelaide, SA.