Some time ago, I asked a friend for a frame.

“Something cheap and cheerful.”, I said. “Just need a quick build for the Winter, while my Merckx is being painted.”

And along came the photo.

Oh Geez. It was tired, so so tired. And it was rusty. Quite rusty, in fact. But it was a Ferrari, right? Of course I wanted it. You would too.

So Big Red finds a new home at MV, and we strip it down to see what it’s got. It’s a Technotrat frame, with a never-before-seen Bozzi/Falck decal on the downtube. It’s about an ’85 model I reckon, cables under the BB, but no brazed lugs on the downtube – it had a clamp-on shifter set. Must have constantly come out of tune in the cables, the 80s weren’t always high quality, huh.

A full 105 gruppo though; shifter, mechs, brakes, crankset, hubs. You can find them on eBay now, there’s a good home out there waiting for them (please bid!).

The forks had both problems – they were rusty, and they were shit. Scrap bin for them.

But Big Red was straight, not too rusty for a resto, no damaged threads, and with a couple of small adaptations he would take a 2017 gruppo and live a second life.

Test Mule Time! I’d been wanting to build a 30-speed for a while, with a 30t inner front chainwheel to combat the local heart-stopper we call Twin Peaks.

Surgery over, Big Red is a rocket ship that also climbs like a billy goat. What a ripper. 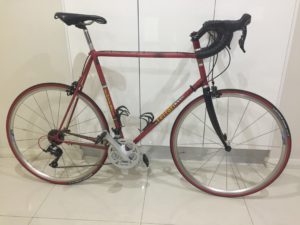 And did i ride it again? Of course not. By the time I had all the little bits I needed to get the gruppo running right, the #1 bike was back from the paintshop, and calling out for its new build.

So straight to phase 2 for Big Red; now it’s in the safe hands of Peter Fleming @ Star Enamellers, with a fresh set of Cyclomondo decals and a bright future. 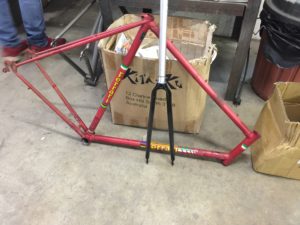 Stay tuned for this Maranello Red 30-speed super bike to hit the road in early 2018.