I watched it for some time before buying it, because I wanted a 20th Anniversary in the museum, but this wasn’t my first choice of frame from that year’s lineup.

This is the bike in the EM 20th Anniversary catalog of 2000:

In the middle of the EM range, the original bike was built from 7020 Alloy with steel unicrown forks and a Campag Mirage 3 x 8 gruppo.

Twenty years later, it still had the original headset, but no sign of the original gruppo. I wasn’t that bothered about the gruppo though, because triples don’t excite me that much, and there’s cool new ways of achieving the same (or better!) gear ratios than clunky old 90s triples.

The frameset is a 52, so will suit a smaller rider. It has been hanging in the shed, waiting for me to find some time to start the build. These things can’t be rushed!

So here’s the first idea for this bike. I think it’ll be a 1 x 10 flatbar – a hybrid of new wide-ratio MTB cassettes with road geometry and brakes.

Because it’s a 1 x 10, the short cage will work fine, without the potential for underhang problems of a long cage. This is a road bike after all, and a long cage MTB mech will mess with the aesthetics, and we can’t have that, right? Plus, how good are those blue jockey wheels…

This bike now has a a very wide final-drive ratio range of 1.31 – 4.27, all from an ultra-simple drivetrain. That’s less than 5% different to the range of the original triple, and we’ve done away with the weight and complexity of a gear selector, a mech and two chainwheels…

The hybrid nature of this bike needs a high-end STI shifter, so we chose a Deore XT 10-speed shifter. It has the same 10-speed geometry as the 105 mech, a handy gear indicator, and will shift perfectly.

The bike is close to finished, and will undergo some shakedown rides before the frame goes to the painter for touchup and a clear coat.

It’ll be ready by xmas ’19, so contact us here if you want this to be under your tree this December 🙂

Recently, I was referred to a guy that had an old Bianchi in his garage. The bike had a history with an old family friend, who had raced it in Europe before it was brought to Australia.

As you can see, the bike was in a fairly poor state when it arrived in the workshop.

It had good bones though – the Super Leggera was the next-to-elite model in the Bianchi lineup, so it had plenty of high-end components.

Although the Customer’s budget didn’t stretch to a full refinish on the frame, there was plenty of opportunity for a refresh, in order to return it to a rideable state.

We stripped the frame, rebuilt the steering head, BB, pedals and axles. We polished every alloy piece before reassembly.

Corrosion had claimed much of this bike, including the chainring teeth! We sourced a new outer chainring (complete with the Bianchi pantographs) and polished the crankset.

Every part on the bike was aged by neglect. Nothing we couldn’t fix, though…

Lots of before-and-after photos to keep the customer up to date on progress.

When we got to the wheels, there was some major work needed. The hubs were badly corroded (like the BB) and it looked like we wouldn’t be able to remove the freewheel.

The frame is still in pretty poor condition – lots of built-up corrosion. Every bit of chrome is damaged. Unfortunately, the customer’s budget didn’t allow for a full rechrome and repaint.

I don’t think this is the last I’ve seen of this bike though – one day it’ll come back for the full treatment!

Two new wheels built from the original hubs, every component stripped/inspected/cleaned/replaced, and now it’s in perfect working order and ready to hit the roads.

If you have an old bike that you love, we can bring it back to life. Most things can be saved, and we’ll work hard to restore your treasure because we love old bikes too.

Contact us here, we’d love to take a look.

“It’s pretty,” my wife said, ”…though we’ll need some Union Jack bed linen if it’s going in the bedroom.”

It didn’t go in the bedroom.

18 Months ago, this was what I said about this bike:

I think it’ll need a repaint, there’s a fair few chips in the paint, and a ding in the TT. Nothing that can’t be fixed.

I’m going to ride it first, though. It’s got a 9-speed Record gruppo on it, and ‘Old Campagnolo’ is not The Millfield Way.

I happen to have some spare Shimano Gruppos lying around, so for a while this bad boy is going to sport a 105 5800 11-speed setup.

105 5800 11sp groupset, some Mavic Cosmics and an experimental colour on the compact crankset.

Bars converted to 1-1/8”, a carbon seatpost and a nice new selle italia saddle. Checkout the layback on the saddle!

The decision is made, it’ll be a full Dura-Ace 9000 gruppo and wheels, plus a touch-up on the paint to retain the original. Crankset will be DA 7700 with Ti chain wheels and some colour – the late-model hollowtech cranks are the wrong style for this retro build.

Those red Keos are still sick 😎

Wheels are done, it now sports a pair of Dura-Ace 9000 hubs, with DT Swiss rims.

Crankset is updated to a DA-7700 Octalink. Maybe ‘updated’ isn’t the right word, but the late-model crankset looked all wrong on the steel frame, so I looked around for something DA that styled right. A thorough clean-up and a fresh coat of red enamel and voila! It now looks great with a new pair of Shimano SG chainwheels, and some groovy blue bolts.

The largest problem was that the original DA-7700 bottom bracket was cool, but who likes rebuilding BBs every six months? Out it goes. I’ve put a 105 cartridge BB in it, good for 5 years minimum. Sweet!

That’s it for now, I’m going to ride it for  few months until it goes away for paint repair. When it comes back…full D-A 9000 gruppo!

The parts bin is now full of love from Japan. DA9100 11-speed shifters, front and rear mechs and brakes.

The frame was sent to Rob @ Tempest Bicycles for a 100% inspection for straightness. All good there, phew! Rob replaced the original number hanger and set the rear dropouts to 130mm. He also faced the BB shell, and recut the BB thread.

A set of top tube Motorola team decals was sourced from Cyclomondo, and along with the frame they are now in the hands of Peter Fleming at Star Enamellers. It’ll be repaired, not repainted. I want the bike to always carry the original paint, even if it has some small imperfections that cannot be repaired. Patina is great!

I’m planning a 1-1/8″ stem conversion, with a Ritchey 30 degree stem and a set of colour-coded red 31.8mm bars. Of course, the Dura-Ace crankset will be painted to match the red lower frame, with new custom Merckx decals.

Next step – the final build!

Update March ’19: This bike is complete, view it here.

Some of you will have noticed Hamish in our photos and videos.

He’s a West Highland White Terrier, and there’s not much terrier in him unless you’re a rabbit.

He’s been around bikes his whole life, so whether we’re building one or off to photograph it afterwards, he’s part of the process.

Hamish is getting two Westie pups to play with soon. He may decide that the Workshop is the only safe place to be.

The new shop dogs – Molly and Dougal – posed for some photos.

Interesting project arrived in the MV workshop this week, for a customer in Perth.

This will be the first De Rosa for this customer – and all fast Italian things should be red – so it’ll probably get a colour change.

A rechrome on the forks, some fast red paint, new decals, and Gino’s yer uncle!

New workshop in the country is nearly finished – feel the serenity.

As you can see, the 50th Anniversary Molteni Replica is finished – I’m loving the new gold rims.

Missing from this year’s photo:

The Motorola, 10th Anniversary and Millfield Special #1 (still at the painter’s)…

The Faema, The 7-Eleven, The 3-Athlete (ready to go to the painter’s)…

The Cyclocross (still looking for the right forks)…

And that makes a lucky 13. Not bad, but I think 20 is probably the right number 🙂

Isn’t it good to ask yourself questions. I often do it.

I don’t always put those questions to myself in writing though, so this particular issue must be something important. I must be trying to work out my kinks in public – is it transparency I want? Or the critical eye of those I trust?

OK, so we all want to leave a legacy. Nothing strange there. I’ve done some good stuff, and left behind a body of work. I have a family that loves me in spite of all my ‘Krazy’.

But there’s something about bicycles, isn’t there. They have a permanence; a perpetuality that hasn’t been made redundant by technology or design. They’re still fundamentally the same machine created 150 years ago. Two wheels, forks, pedals and chain.

Of all the things I’ve done with my brain and my hands in my half-century, I think the bicycles I’ve brought back from the grave are the best uses of the skills I have. So my legacy is going to be the Millfield Specials.

I’m going to take dead bicycles, and bring them back to life.

I’m going to find good things, and put the Millfield name on them.

I’m going to find bicycles that are unloved, unremarkable, undervalued or unwanted, and find them new lives and new homes.

Some time ago, I discussed an important issue with my wife.

It concerned the placement (and therefore the colour) of the training bike that was due to be placed in the living room of the new house we’re building.

Placement was no issue; there’s a spot marked on the plan, so all good there. As to the colour, though…that’s a different story.

The issue was that all the bikes I have are the wrong colour, and will clash with the decor.

There was nothing else to do, but look for a new frame, and let my wife pick the colour. Everyone is happy!

Green…out. I’ve never seen a green bike I like. Couldn’t even bring myself to look for a Team Stuttgart. Green=Ick.

It’s a Yellow Bike, then. Time to start looking!

By Mid-August, I had found this frame online:

…and it’ll be repainted as a Team Lotto replica…

…and it’ll be perfect if I ever get invited to a L’Eroica ride!

They Yellow Bike is now complete, and can be seen here.

Christmas Eve tomorrow, so today is a perfect day to give a shout out to the GOAT. 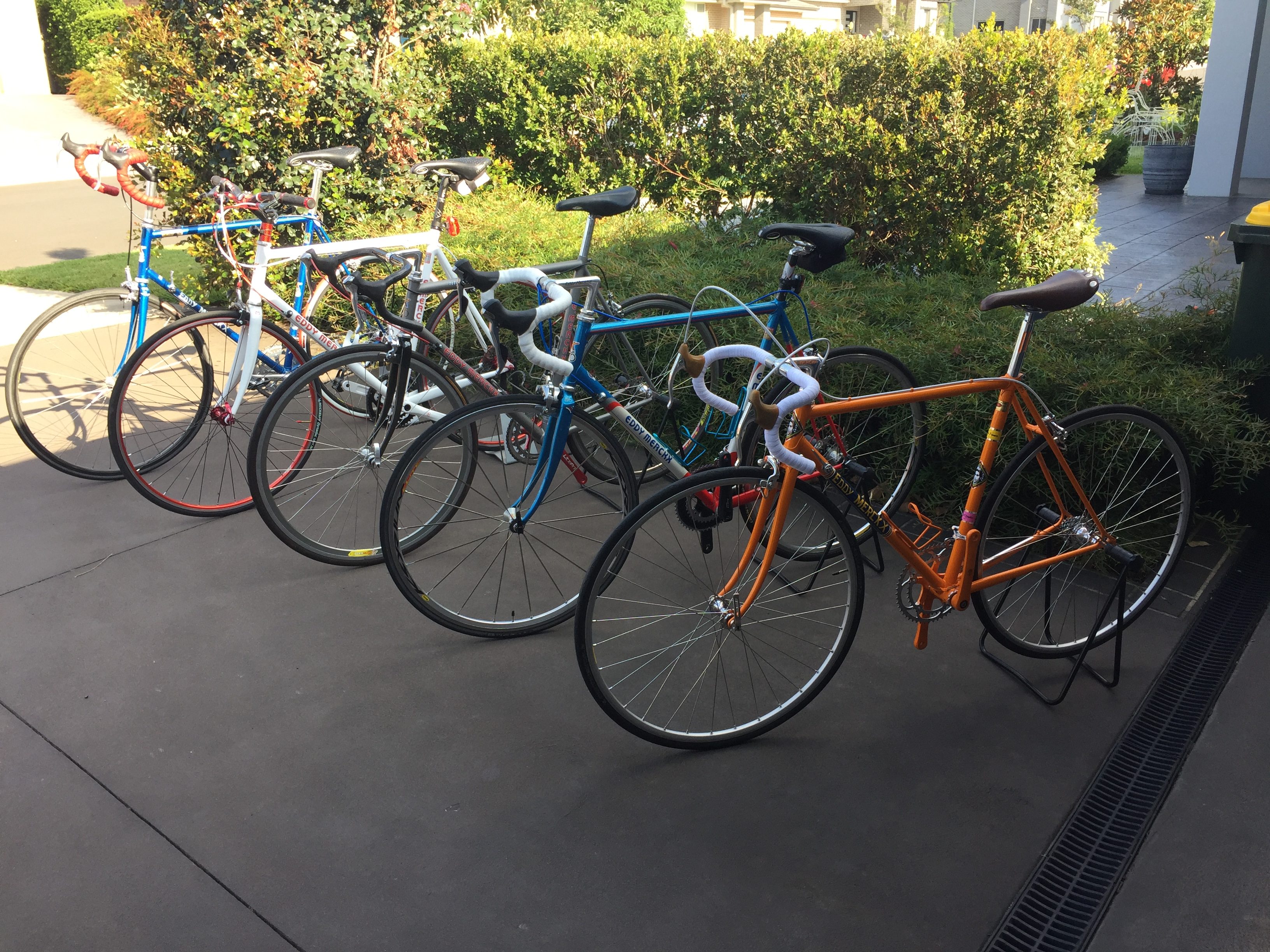 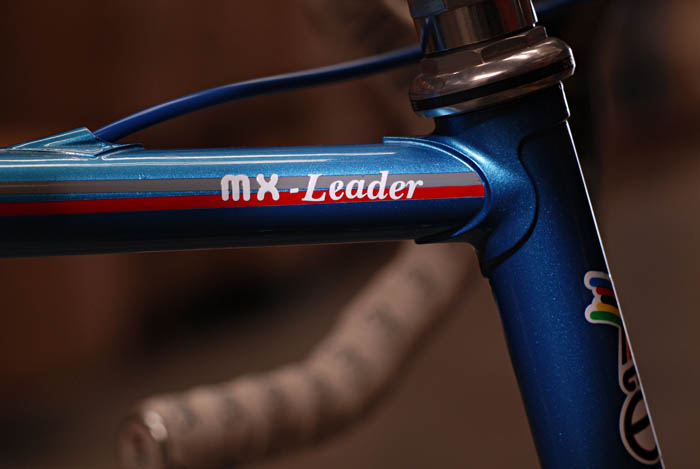 Welcome to our new site.

As with everything we do, this site will evolve through tinkering. Unable to leave well enough alone, i’ll change, update, delete, tweak, tune, modify then change again.

Can I apologise now for what I’ll inevitably do? I’ll try to keep it on topic, but if you’ve seen the bikes I build, you’ll understand that there are no guarantees (sorry!).